She is a gray cat, but around her eyes the fur is black, so that she looks a little like those fifteen-year-olds who believe that being Cleopatra is mostly a matter of mascara. - Jessamyn West

Neither Ducky or I have darkly trimmed eyes. Some cats do, even some mancats.

We had rain, some snow, lots of wind and furry cold now. Mum got what little snow we had off the end of the driveway before the plowed stuff froze. Then she came inside to stay warm, watch fevvers and feetsball with us. Ducky helped to keep mum warm by sitting on her legs. 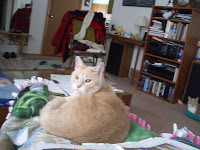 Sammy and Andy asked for winter pictures, here are a few from Sunday, they don't get much snow down in San Antonio. 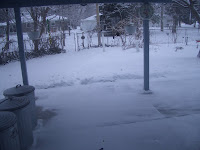 Out the back looking towards the fevver feeders. 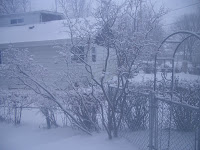 Out the kitchen windows towards the neighbors house.

Our Secret Paw arrived too, from Sweet Praline, more later. Mum opened the box for us, but did not help us open the actual prezzies yet.

The Pack - losted to those Lion guys from the Mitten state. Was a strange, low scoring game. Plus the QB ARodg bonked his head on the ground and didn't play the last half of the game. Mum says it is not likely for the playoffs for the team.

Grampa Brett and the ViQueens - will now be playing on Monday evening in Detroit against the Giants. The weather messed things up for them first, then the roof on the stadium broked. You can go here to see video from inside during the collapse. Mum thought it was kinda cool. Plus towards the beginning she thinks she sees beans running along the far sidelines. Probably to get somewhere safe.

The Colts - played last Thursday and won. No drama as far as we know.
Mewsings by Just Ducky at 12:01 AM