Happy New Year! Well officially as we do this we are still in 2010 but many of you may not see this until it is the new year!

Mum went off to day hunt as usual today but got home a little bit earlier that usual. She came home with a bag full of foods to eat. 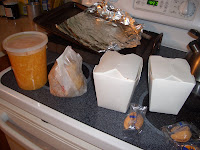 A big container of soup that just went into the big cold box. Mum loves their egg drop soup and says it it cheaper than her making it. 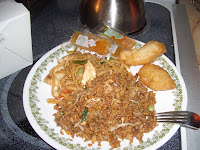 Here is the stuff all out on the plate, chickhen, chickhen and more chickhen. Appetizer, lo mein and flied lice! 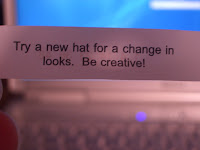 She got several fortune cookies, this is the one she opened tonigh. She hates hats so trust me it she won't be getting a new hat.

Guess Ducky and I will pop around the blogosphere and find a a party to two to stop in at. On Caturday we will be thinking Roses.

First we will watch the pretty parade with all of the flowers, then later we, well at least mum, will be watching the Rose Bowl game. Whiskerconsin's Bucky Badger will be playing some frogs!