No workman can guild a door which shall be proof against a cat or a lover. - French Saying 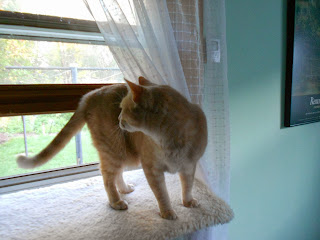 We had a good weekend. Lots of noms and naps, some open windows for fresh airs, cuddles from mum. We had to snoopervise her on Caturday for moving all sorts of stuff around in the dungeon. She got all dirty, but cleaned up ok, then was all tired so went to bed early on Caturday night.

We watched the sailing and are furry bummed out that our team, New Zealand's Kiwi's haven't closed this out. They didn't race on Caturday and Sunday Larry E's team won both races. Kiwi's just need one win to take the cup, Larry four. Go Kiwi's we don't want Larry E's team to win!

The Pack - It was an ugly game and the Pack ended up on the short end of the score playing the Bengals. Mum said she figured it wasn't going to be a good day for the team. More players banged up, they get next week off.

The Broncos  - Mr Peyton doesn't play until Monday night.
Mewsings by Just Ducky at 1:00 AM