Some people say that cats are sneaky, evil, and cruel. True, and they have many other fine qualities as well. - Missy Dizick

Yes we cats do have lots of wonderful qualities. Some humans appreciate them, embrace them and cellybrate them. 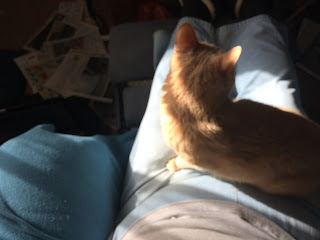 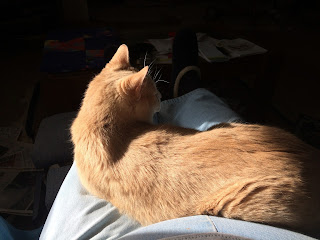 Me doing two things at once. Collecting sun puddles and keeping mum's lap all warms. We finally got a break on the colds. Mum said it was nice enuf to go outside and take a walk on Sunday.

The Pack - continuing to run the table. They got off to a slow start, but came on later to score lots and beat those Giant guys from NYC. Next up, they get to go to Jerry's World and play with Cowboys. Mum says three more W's and that would make them champs.
Mewsings by Just Ducky at 12:30 AM