Cats do care. For example, they know instinctively what time we  have to be at work in the morning and they waks us up twenty minutes before the alarm goes off. - Michael Nelson

HA! I never know what time to wake up mum. She gets up at all different times depending on what is going on. She even had the noisy box by the bed go off a couple of times this last week. Even on Caturday, she was up and out of the house before the sun came up!

So what did she do? One last day with racy cars! She had a beauty-ful day she said. The weather was good, lots of sunshine and she only was gone on Caturday. She was back with me to sleep and she stayed home on Sunday when it rained! 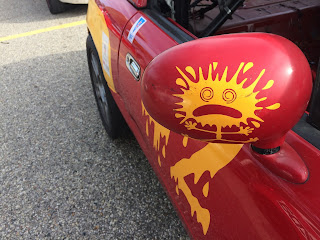 A silly graphic on the side mirror, same thing on the other side. Then a pic of mum in the sunshine. Yeah, she had her bright tie-dyed shirt on. The better to be seen! 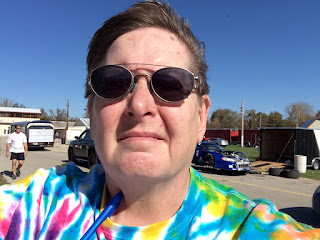 Here is a short video of the cars as they leave where mum and others make sure they are belted in, helmets on and properly clothed with race suits and gloves.
So when she got home I sat behind her on the couch so I could soak up some loves. 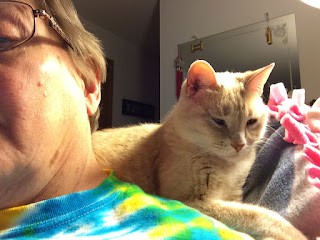 Mum pulled out her crow-shay on Sunday during the feetsball game. Said when she pulled it out that she thought she was farther along. Oh well mum, you have more to do to keep you bizzy while watching feetsball.

The Pack - Well Brett is starting the game. No, not Grampa Brett, he is all retired and in the hall of fame. They did score and actually led the game for a while. But the second half they didn't do as much right, so losted.

What was nice, which was NOT shown on the moving picture box, was the recognition of the first Stouper Bowl team. This included Bart Starr who looked purrty good for a guy in his 80's and who has had some health issues. He was able to walk out to the field. Last time he had to ride on a golf cart.

Everyone have a wonderful week.
Mewsings by Just Ducky at 12:30 AM