If you want to know the character of a man, find out what his cat thinks of him.

I think a great deal about mum and it is good. Yeah, there are times she goes out and leaves me along. Heck, I just nap. I probably would be napping if she was home anyway!

Mum went to the final library event of the community read. First they had foods for the humans, more than enuf for mum to make dinner out of it. They they also had soda and popcorn for the moovie. Mum saw the original version of True Grit. Mum says the more recent version is a better copy of the book. You know John Wayne had to be the hero in the first one! 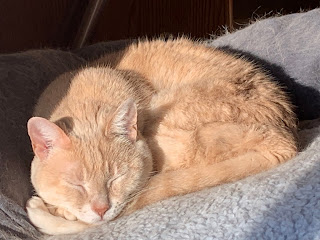 Me just napping in the sun. Back to my summer spot for napping. Mum will have a bizzy week. Eye doc, election day, library stuff and a funeral too. She just found out a co-worker died and she was 3 years younger than mum! Wow. Mum doesn't think she had been sick, so don't know why, at least not yet.

Everyone have a wonderful week. Don't let anyone fool you today.
Mewsings by Just Ducky at 12:30 AM