Cats regard humans as warm-blooded furniture.

Officially it is summer here now in the northern half of the globe. Longest daylight hours of the year, but it was a cloudy and a bit rainy. So hard to tell if it was long daylight day or not.

I sat on mum's lap for a while yesterday. She worked on her crow-shay hats while she watched racy cars on the moving picture box. She finished one hat and did two more. Being a rainy day she didn't have to much else to do. She finished the last part of a book and did the washing. 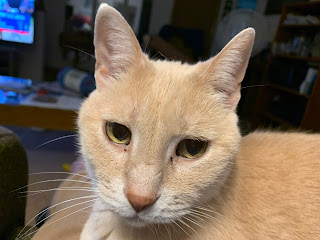 One of the shelters had a fund raising walk. This was one of the cats who was on the walk, he looks rather cool doesn't he? 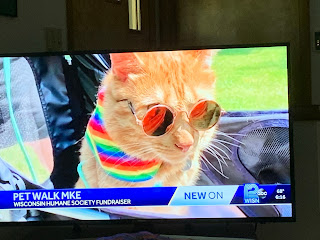 Not much going on this week, everyone have a good week.