Who would believe such pleasure from a wee ball o' fur. - Old Irish Saying

OK, winter has decided to show up, finally. Mum will have to get the snow eating monster out to clear the driveway today and they are talking more for later in the week. Will have pictures when mum gets them.

Mum spent a lot of time in the kitchen put I didn't get much foods. No hams, chick-hen, turkey or anything else, not even a lick of the butter. She kept doing more and more loads of this. Don't worry she doesn't eat all of this, she goes and gives it all away. 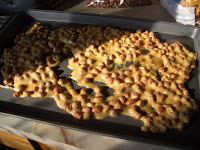 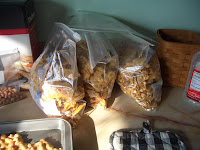 Mum worked some on the Christmouse cards, but then the printy thing started smudging on the paper, mum couldn't get it cleared off. So the letters for her and Grampie she will print them out at work.

We got all of the stuff we want to send out for my Secret Paw, but we don't have a box big enough to hold it all! So mum has to find one so we can send that out. So that isn't quite done, but getting close. 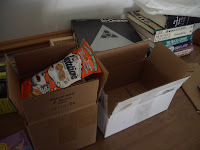 The other day I said mum would have to get her ear muffins out. They is not something you eat, it is something she wears! Big white fluffly, furry and warm she says.

Brett and them Vikings - playing on Sunday night in the early 4th quarter, them red birds are winning. Woohoo! Go Cards! Mum is going to head off to the sleepy spot before the game is over.

The Colts - they won, still unbeaten and mum got to watch the game on the moving picture box.
Mewsings by Just Ducky at 12:15 AM