You see, wire telegraph is a kind of very, very long cat. You pull his tail in New York and his had is meowing in Los Angeles. Do you understand this? And radio operates the exact same way; you send signals here, they receive them there. - Albert Einstein.

OK Al, if you say so, but I have never seen a cat that had its tail in New York and its head in LA! That would be one long, skinny cat!

On Caturday, The Colts and The Saints won. On Sunday Brett and them Vikings won, along with the Jets.

Chanpionships will be next Sunday. The Colts and Jets play, along with the Saints and Vikings.

Mum did lots of work on the blankie project and is now over half way done. She works on it lots while the feetsball game are one. 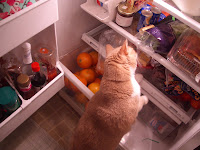 Me checking out the inside of the big cold box. I did gets some ham this weekend when mum had some in a sammwich this weekend. I also gots lots and lots of treats as mum uses them to keep me out of her yarns!

I also went outside this weekend, not on my own. Mum scooped me up in her arms and took me outside for a bit, said I needed some fresh airs. She did put my front paws down on that wet, cold white stuff. I want some green grass please. Mum says the green grass may be a few months away.

Good news is mum doesn't have to go day hunting on Monday. So extra time for me and extra treats too.
Mewsings by Just Ducky at 12:12 AM