A cat will tolerate cuddling and stroking - if she has nothing better to do. - Author Unknown 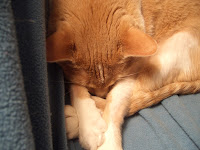 Yeah I agree with that. Mum says I am a lover kittie first thing in the AM when she gets up. Then for a little bit when she comes home from day hunting. After than I will ask for scritches on my terms but sometimes mum comes after me anyway. If I really don't want the attention I start growling.

It was warmish, rainy, foggy for most of the weekend. Mum spent lots of time running around doing stuff on Caturday, plus dinner with Miss Lynn. The worst part is mum gotted stopped in the metal monster by the local police! Seems her brake light had burned out. She was good and gotted it fixed right away so now she is in good graces again with the local police.

My furiends over at Zoolatry were so kind to send this over to me and a lot of other kitties. Thank you.
Plus they are doing a contest called "What's in your litterbox". Well other than the obvious stuff, nothing else. I don't hide my toys there! Go check out the contest. 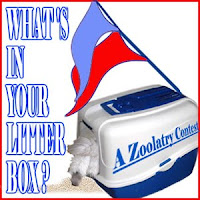 The Stouper Bowl Matchup is set.

Mum is furry happy that The Colts beat them Jets for the AFC Championship! I know that will make the gang over at Cat Naps in Italy happy too. They are from Colts territory.

Now on the NFC side, it was quite a game. It went into sudden win overtime and The Saints prevailed. True to form, Brett the Viking didn't have a good championship game, he threw 2 interceptions and there were a bunch of fumbles by the Vikes too. Mum is happy, there is no way she could support the gang in purple.

So on to the Stouper Bowl in two weeks on February 7. Let the hype begin.