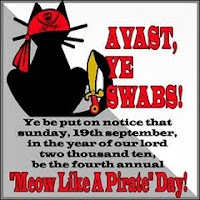 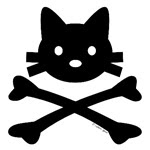 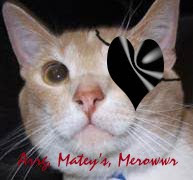 Hi Matey's! Pirate Dread Vane here. Today has been declared it 'Meow Like a Pirate Day'. So I am! I have put on my pirate eye patch and done my nice deep meowrrrr.
Dread Pirate Vane

Like the famous Dread Pirate Roberts, you have a keen head for how to make a profit. You tend to blend into the background occaisionally, but that's okay, because it's much easier to sneak up on people and disembowel them that way. Arr!
Get your own pirate name from piratequiz.com.
part of the fidius.org network
This year The Good Ship SassyCat has a new mate to join in. Ducky or with his pirate name Dirty Jack Kidd. 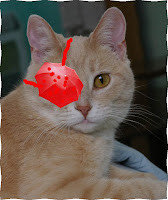 You're the pirate everyone else wants to throw in the ocean -- not to get rid of you, you understand; just to get rid of the smell. Even though you're not always the traditional swaggering gallant, your steadiness and planning make you a fine, reliable pirate. Arr!
Get your own pirate name from piratequiz.com.
part of the fidius.org network
So you better join in, or you will be walking the plank from the Good Ship SassyCat! Now it is time to hoist a few brews and toast the pirate brigade. Arrrgh, Mateys's.