A dog will flatter you, but have to flatter the cat - George Mikes

Mr Hawk stopped by and sat in our crabby apple tree, first in one spot, then another. Mum was lucky she had her fancy flashy box ready. Biggify if you need to. 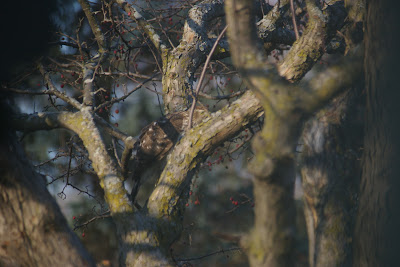 Sitting in the other spot of the tree.

Mr Squirrel plastered up against the trunk of the tree. Mr Hawk was just a few feet above him!.

Me just resting on mum's stuff in the chair. She has a tendency to toss her jacket on the back of the chair, her scarf in the seat. Something soft to sit on and get all furred up.

The Pack - as the number one NFC team, they got the weekend off. So there were games to decide who they will play next Sunday and that will be the Giant guys. Yeah, we beat them a few weeks ago. Plus they gotta come through the frozen tundra of Lambeau Field.

Grampa Brett - still retired, but they showed him attending the Lions-Saints game on Caturday night.
Mewsings by Just Ducky at 12:05 AM