Every life should have nine cats.

Well maybe not all at once, but over their lifetimes, beans could easily have nine kitties.

We had a good first day of the new year. A bit of playing, napping, extra treats. Mum even did the rest of the lobster, but this time she put it into pasta with Al Fredo's sauce. Yes she gave me a little bit again and Derby didn't want it. But tonight, mum didn't have any ice cream for him to lick the bowl.

Yes, yesterday was lobster and butter. Only way to eat it mum says if you are just eating lobster straight up. 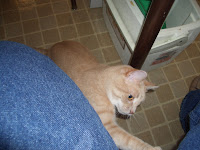 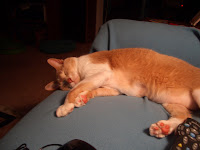 Mum finished the crow-shay blankie she was working on. Just has to trim off the yarn ends, then she can give it to the lady at work for her baby to come.

The Pack - Ended the regular season with a win with a record of 15 and 1. Our regular QB ARodg didn't play, but his backup guy did good. Team record of 6 TD passes and 480 yards, but mum says the defense has to show up better. Lots of scoring by the other team and it wasn't decided until The Pack intercepted to end the final drive by them Lions. Long game too, nearly 4 hours long, so mum had lots of time to crow-shay.

The Colts - lost the game, gained the first pick in the draft in a few months.

Grampa Brett - still retired
Mewsings by Just Ducky at 12:26 AM