If we take the case of cats, they say little but they think a great deal; they conduct trains of reasoning. Andrew Lang

Mum did lots of resting, reading and such. Here I am sitting on her to make her stay put and put some healing purrs on her. 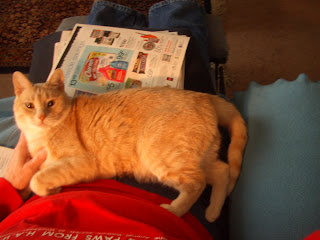 Derby meanwhile was resting to take a later shift. Sleeping on mum's bed, where mum isn't sleeping for now. Says she is more comfortable sleeping in the chair and she gets about the same number of hours of sleeps.

Plus she was sleeping so bad she had to redo the bed everyday and that is hard as she isn't supposed to lift things. So she says it is hard to tuck in the sheets and blankies. 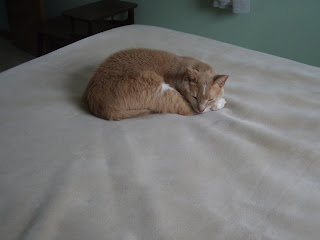 Mum says she will be happy once Tuesday comes and go. Then the election stupidity on the moving picture box and on the calling thingy will stop. At least for a bit. She is tired of it all. She votes for "none of the above".

We hopes the rest of you have a good week.
Mewsings by Just Ducky at 12:05 AM