He shut his eyes while Saha [the cat] kept vigil, watching all the invisible signs that hover over sleeping human beings when the lights are put out. - Colette

I had to help mum get to sleep on Caturday night. She was up and down, then at 1:45 AM somebody called mum's phone. They didn't leave a message. Mum was so tempted to call them back early, but she didn't.

She got all of her usual Sunday stuff done AND since it is now feetsball season, yeah we had to watch feetsball. 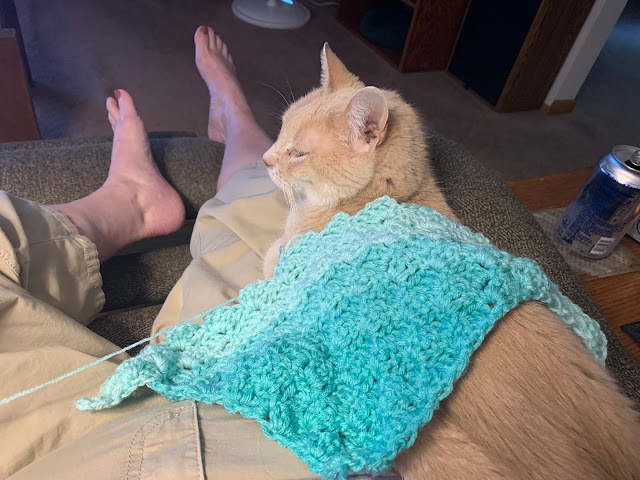 Plus since it is feetsball season mum got out yarns and started to crow-shay during the games.

It was a super rainy day and me and mum watched Da Bear game from Shy-town. They actually won the game and to cellybrate they ran on the field and slid into the puddles!

The Pack - they didn't look good at all playing the ViQueens. Oh mum says we have a King now, they should be the ViKings. The Pack didn't score at all in the first half and barely managed to score once in the second half. They played bad last year in the first game, so we shall see how things go.

Next week we play Da Bears on Sunday night at Lambeau.

Have a good week everyone!