A cat in the grass is like a tiger in the jungle. - English Saying

We have an English saying today so I am off to be with Eric and Flynn today. Poor guys are locked up all month while their beans are gone. We will fool them and teleport out and go out into the nice English country side. So three tigers prowling!

It was a furry quiet weekend for me. Lots of naps, but mum left me on Caturday and went out with Miss Lynn. They had dinner, then went to a dress rehearsal of a play called Happy Now?, Miss Lynn got the tickets for free from her work. Mum says it was OK. But she didn't get home until furry late, then went off to the sleepy spot right away

So I decided she needed to have an early wakeup call on Sunday. I jumped up on the beside table about 7 AM and knocked a bunch of stuff off, making lots of noise. Of course mum woke up, then couldn't get back to sleeps. So she got up, got my breakfast, her breakfast and started the laundry routine, then off to get our foods for the week. Once that was done she watched The Pack play, then she got wise and we had a nap together.

The Pack - They WIN, Mum says they are still playing sloppy, too many penalties. BeauBeau and Angies's beans got to see a victory!

Brett and them Vikings - Managed to squeak out a win. Them Raven's almost won but missed a FG at the end of the game.

The Colts -taking the week off 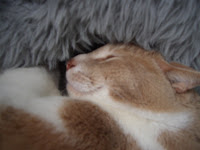 Stop back tomorrow, it's my purrthday!
Mewsings by Just Ducky at 12:02 AM