Cat Scan: When a cat checks out a yard for prey. - Richard L Peterson.

Yep, some prey, a tasty fevver or a chippermunk. But we are inside so they is safe. The hots are back, so we don't even have the windows open again. Mum opens the door and you can feel the stickyness outside. 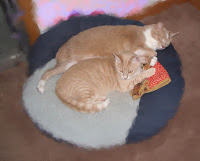 Mum fancyfied a picture of the two of us. Chopped off the extra stuff and smooshed and softened the parts that aren't us. She said she wanted and did send it to herself at work to put on her puter. Then she can see us on her puter at work!

Mum spent part of yesterday afternoon hiding in the room with Grampie's stuff. She came out with a big box of paper stuff that went out to recycle. Then she took out to the metal monster room a plastic bag with something all wrapped in a bag. Then she came back in and talked to a guy and gave them our address.

Shortly thereafter this car pulled up in front of our house! POLICE?! Mum we didn't do anything so bad that you needed to call the cops on us. We promise we will behave! Yes we have been doing lots of THoE but we haven't wrecked anything. Mum went outside to talk to him and then he went away with this! Holy Moly. We didn't know we had a pistol packing Grampie! 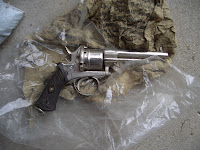 Note from mum: I talked to my Dad, he confiscated this from some kid in a confirmation class ages ago. He has been retired for 30 years so who knows how long ago he took it away. Although he remembered the kids name, I didn't want to know! It has been in that filing cabinet for ages, been moved at least three times. I know we never had to buy squirt guns when I was little but I never expected something like this in my Dad's stuff.

The officer couldn't be sure if it was real or not, he wasn't familiar with it, and said it had to be old. I told him it could have been from 30-50 years old. I just wanted the thing gone and out of my house! I have no experience with firearms of any type, and the officer says they send it to the state crime lab, they make sure it was never used in a crime, then they melt them down.
Mewsings by Just Ducky at 12:42 AM