I firmly believe that any man's finest hour, the greatest fulfillment of all that he holds dear, is that moment when he has worked his heart out in a good cause and lies exhausted on the field of battle - victorious. - Vince Lombardi

The Green Bay Packers are Stouper Bowl Champions! Woohooo. They were ahead the whole game but man it took a final drive for a field goal and the defense holding the Steel guys to give it up on downs with less than a minute to play.

What a game! Like they expected, a close game but The Pack managed to bring the Lombardi trophy home to Green Bay.

Thanks for everyone who stopped in for the party. Mum managed to contain herself and not scream at the TV. Just lots of cheering, clapping and some worrying too.

Still a few extra fur piles in the house. We cellybrated after the game for a while. Mum went to bed, we partied on. Just everyone teleport home safely.


A couple of our buddies decided this weekend was the time to head for The Bridge. 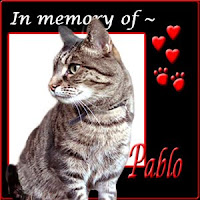 Farewell Pabs, our Tassie buddy. We will miss the Aussie rules feetsball updates. His mum even was an honorary cheesehead for the game yesterday. We are glad we won the game to give here something to smile about.

Laila and Minchies cousing Bonnie ran off too. 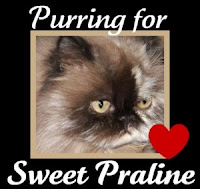 Plus our Secret Paw sweetie Miss Praline isn't feeling as well as she could. Waiting on word from the V-E-T on her bloodwork.

So big purrs to them and their beans.
Mewsings by Just Ducky at 6:50 AM