"It's like I always tell you, little kit, said Cecil, his cheeks bursting with herring. Don't be a chicken, be a cat! Be adventurous."   - Anton and Cecil: Cats at Sea

Made it to Monday. Me and mum had a good weekend, lots of sun and nice temps. It was so nice that mum was outside on Sunday without a jacket! She was working in the sun so that helped, but even later when the sun was almost gone she had no jacket on.

What was she doing? Putting the Christmouse lights out! Said she would rather do it early and not turn them on, than wait and be freezing her fingers off doing it. It was 60 degrees F out yesterday. Next weekend it may only be in the 30's! 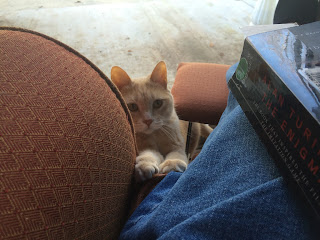 Me getting ready to invade mum's lap. Put that book down and pay attention to me! She did for a bit. 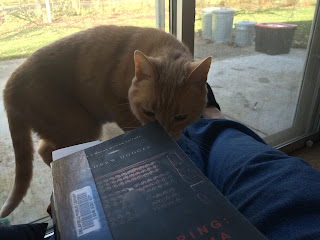 Then I jumped up to the top of the tower and mum decided she would nap a bit. Not for long, I jumped down and landed on her belleh. She did have a pillow on her to give her a bit of a cushion, but she made a noise "OOOOOFFFFFFF". 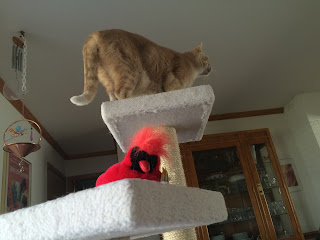 The Pack - have now lost three in a row, all their games since the bye week. Maybe the guys that played earlier have been replaced by bad players. They lost to the Detroit Lions, who to this point in the season had won one game. Plus they Lions hadn't won at Lambeau since 1991!

The Broncos - lost big time to KC, seems they are going downhill too. Peyton kept throwing it to the wrong team. It was so bad they took him out of the game! But Peyton did surpass Grampa Brett in number of passing yards.

Have a good week everyone.
Mewsings by Just Ducky at 12:00 AM