Cats are absolute individuals, with their own ideas about everything, including the people they own. - John Dingman

Yeah, I have my own ideas. Sometimes me and mum are on the same page, other times not so much. Most of the time we are good. 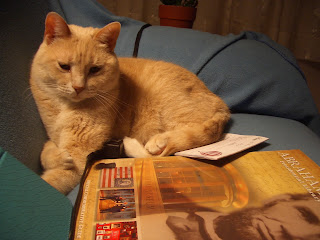 Mum had a nice lunch with the other cat mum's, Donna and Jen. Their kitties don't blog much anymore, but mum keeps up with the on Facebook. So they ate, talked kitties, and more kitties. Mum came home all full. Did some chores, then went out for another racy car dinner. This was the local club, mum did not win any awards this week, but a good furiend got the member of the year award. She sat next to him at dinner.

Mum got the outside Christmouse lights up from the dungeon. She wants to get them put up this week while the weather is still nice. That way her fingers won't be all frozen up. She won't light them up for good until after Turkey Day next week.

The Pack - losted. Just don't have it this year. Everything seems to be just a bit off. Mum has the game on the moving picture box, but was going through the paper during the game.

The Broncos - won! They won on funky play running back a blocked PAT.