A cat is, by and large, sophisticated and complex, and capable of creating three-act plays around any single piece of action - Gladys Taber

I forgot to give Zoolatry the credit for the nice LiveStrong graphic from Saturday. Thanks guys you are the bestest.

Yeah, lots of drama around our house this weekend. Mum started bring in boxes of stuff again on Caturday. Then she started moving the furniture around! We had to be careful not to get stepped on 'cuz she wasn't paying much attention to us.

This is what our guest room has normally looked like. A little bed for us to nap on, the bears and other fluffies to nap with. 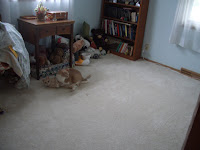 The bed is gone! But that makes more room for us to wrassle on the floor. 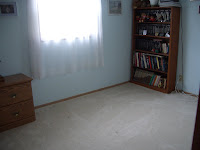 All the stuff is gone except for the bookcase and the little bedside table, which got moved from the other side of the room. 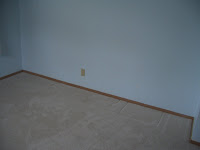 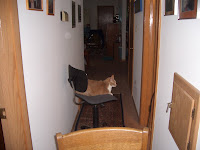 Derby sitting in the hall on the chair snoopervising mum moving stuff from one room to another, 'cuz this stuff had to go somewhere. 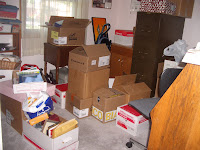 The other room where mum put most of Grampies stuff, this is from back in early July shortly after all of the stuff got here. 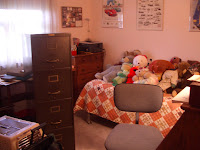 This is the room now, the little bed and fluffies have moved in here. Plus lots of other stuff piled up in the corner, mum has had to move stuff out of this room to get this stuff in the room. 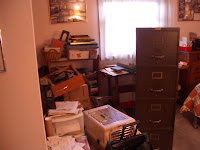 Mum didn't take any other pictures but the living room has some of the stuff in it and so does the dining room. She said Friday things will change again, but it will give us more places to nap! Can't wait for that.

Here is some video that mum shot months ago. We can tell 'cuz none of Grampies's stuff is in the room. Mum needs to learn to hold the video thing steady when she walks around. You could get sea sick otherwise.

The Pack - Hung on to beat the Lions! Mum watched the game with Grampie at his place.

Grampa Brett and the ViQueens - took the week off

The Colts - Got beat in the last seconds by a field goal to break a tie by the Jaguars.

Grampie update - it has been decided that he will be staying at the rehab place but moving up to second floor which mum calls the nursing home. He needs to be monitored since his lungs aren't going to work as well as they should anymore. He will need oxygen from here on, but Sunday he was about as good as mum has seen him. He understands that he needs to be here from now on and isn't as confuzzled.
Mewsings by Just Ducky at 1:30 AM