This is how our waterfall has looked in the past, water flowing nicely, green trees and bushes. 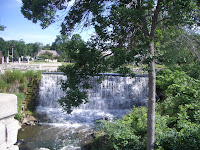 They took the water away several months ago to do an inspection and fix things if they needed fixing. Then when we had our flooding back in July, mum took a video you can see here.

Mum stopped back a week or two ago and still no water, but all of the green stuff is gone too. Mum said they took the trees and bushes down since they weren't supposed to be there. Some of the stuff growing was not native to Whiskerconsin. 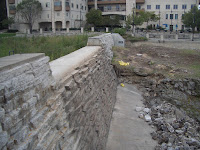 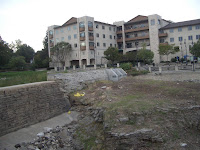 Here is a video of the waterfall now, mum thinks they replaced the concrete/cement where the flood gates were, they did take the flood gates out. Also, if you look close at the start of the video you will see some beans. While mum was there they went round the protective fence and were climbing out on the dam! Mum was nearby and said they should get off, they shouldn't be out there. They got mad at her, mum didn't care, she thought they were stupid, had gone by all of the warning signs. They did get off but mum was prepared to call the cops if they hadn't.
Mewsings by Just Ducky at 7:38 PM