It has been the providence of Nature to give this creature [the cat] nine lives instead of one. - Bidpai

Mum has gotten some of the Christmouse stuff out. Grampie's little tree, door wreath, the jingle bells for the door and red ribbon bows for outside. None of the little white guys have shown up yet. But then there isn't anything white on the ground yet either. 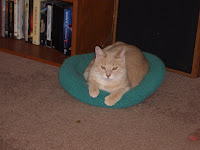 We had a good weekend, lots of napping, watching feetbsall with mum. It included the game on Caturday night when Bucky Badger played in the Big Ten Championship game. They beat the State of Michigan and get to go play in the Rosey Bowl on January 2. Woohoo.

Ducky doing his best to help mum with her crochet project. She expected she would need to have it done by early January for the baby shower. The other department at work scheduled it for December 16! Mum says it won't be done unless she worked on it hours every night. That would make her hands all hurty and sore, if she had the time to get it done. She would rather do a good job and not rush, so she will give her a card that says "I owe you one baby blankie". 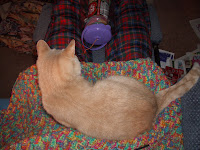 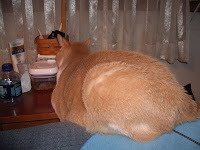 The above picture of me staring at the treat jar from the other night, Abby Normal and Stygia said I looked like a loaf of bread! I resemble that remark.

Continuing purrs for our buddies that aren't feeling well. GJ is supposed to go back to the VET today for more tests, DMM is home and seems to be doing OK for now. Pete is now back home too, he had a high fever, got meds and is now back home. Get and stay better everyone, we don't like it when things go all wonky with other kitties. Our purrers have been on high for days purring for you all. 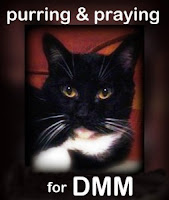 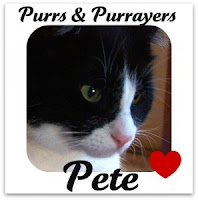 The Pack - pulled out a victory in the last few seconds of the game against the Giants to go to 12 and 0 for the season. If you count the final games and playoff of last season, they have won 18 games in a row. A Rodq our QB continues to do good, defense helped out with a pick 6, but the defense is also giving up lots of points.

The Colts - this was Opus' team, and even going to The Bridge this week didn't help his team win. Their record is the opposite of The Pack. Guess the Colts will get the first pick in the draft. Maybe time to find someone to replace Peyton if he doesn't come back.

Grampa Brett - still retired.
Mewsings by Just Ducky at 12:23 AM