If God created animal angels, they would probably be dogs. Cats would consider it a demotion. - Linda Marrow

Yes, here on earth, we are better than angels. We only become angels when we get to The Bridge.

Some of the white stuff on Sunday, not much and at the official weather guesser station, they got no snow, so we has set a record of days without measurable snow. 280, last measurable snow was way back on March 4. 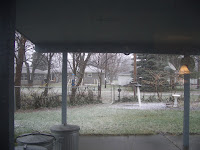 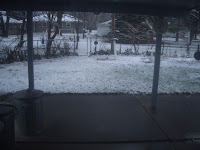 Top picture is just had changed from rain to snow, if you biggify you might be able to see the snow flakes. Bottom picture was about 4 hours later.

Mum spent Sunday afternoon working on the Christmouse Cards, we both snoopervised her from time to time. Otherwise we spent our afternoon doing this! 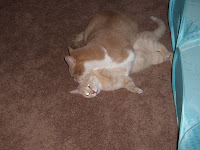 Go visit Spitty, he did his own version of the 12 days. The "Rodentia Version" as he calls it. Go and see it, it is grate. Or you can see it in our last post comments.

Anyone else come up with a new version? If so, we want to know.

The Pack - played on the snowy frozen tundra of Lambeau field against those Lion guys. Didn't we just beat them a couple of weeks ago? Well we beat them again. Go back to the mitten state, you haven won in Lambeau for over 20 years. In first place in the black and blue division!


The Broncos -played last Thursday and won.
Mewsings by Just Ducky at 1:00 AM