It was a flying visit for our buddy Miles Meezer. Mum is so laid back with kitties that he got to do stuff he can't do at home.

The visit started with a thud, when the bloo shorts guy dropped Miles off, just after dawn on Monday. We had to get mum up and get him inside and out of the box. He got to stretch his legs and make a pit stop. 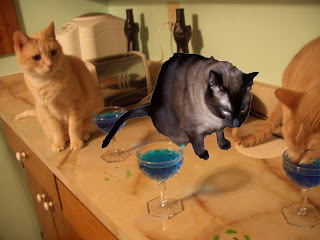 We had drinks and dinner, mum whipped up some really delish blue tuna gizzy's. They were purrfecto, strong enuf but not too strong.Plus she allowed us to use the fancy glasses! These were her mum's good glasses for fancy dinners, she figured it was a good time to break them out and use them for company. Just like her mum used to do. 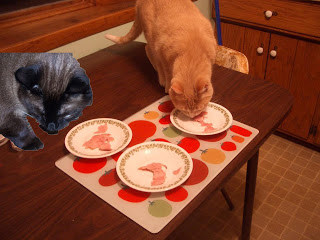 Dinner was ham, with Miles we know we can't go wrong with ham. He was very appreciative of the good ham mum got. Plus mum made sure to make him some french toast before he left too.

Mum loves to cater to visitor requests, making sure they have foods they like and such. Then once mum left to day hunt we were free to do what we wanted. Yep, that included walking on the ceiling. Ducky just had to watch. But Miles brought along his velcro boots and I dug mine out of the dungeon. Gosh that was fun, but not as good with the triple flip dismount that I used to do.

Plus Miles got to visit the little plushie he sent me years ago. It was named after Trixie and Norton, some cats who came before him.

So all too soon Miles visit was over. Back in his box and on his way to Mew Mexico. 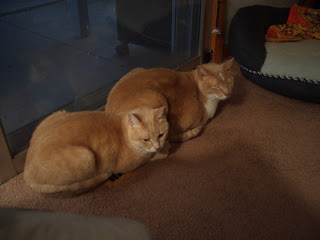 So we will be resting and napping lots today to get all rested up from the fun we had with Miles. Stop in again, bring Sammy, Billy and Nicky with you!
Mewsings by Just Ducky at 12:00 AM