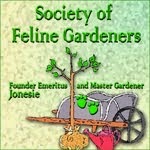 Hello and welcome to Garden Thursday with me, Virginger!

Spring continues to slowly take over, I figured I would give you a re-cap of our icky winter. These are the o-fish-oil stats way down by the air port.

Average Temperature - since November temperatures has averaged 22.7 degrees for the 12th coldest season. Iffin you only look at December 1 to February 28 average temp was 17.2 degrees, 10th coldest. December was 5 degrees below normal; January - 8; February --9

Lowest temperature - negative 14, but we had like negative 18 one morning.

Subzero days - 28 days that were zero or below, Seventh most on record. Average is 12 days.

Snowfall - 62.6 inches so far, heck it could still snow. That is about 20 inches above normal.

Snow cover - streak of 92 days with at least one inch of snow on the ground. From early December and March 10. We still had more snow on the ground for a few days after this. This is only good enuf for second place, first place was 112 days back in 78-79 which mum says she amembers.

The snow from earlier in the week is gone, but there is still stuff left from the winter, so no bare ground. Mum says she will have lots to do once she can work outside on the yard. Get the raking done she couldn't do because it snowed so early.

Here's wishing for a warm up and spring showing up.