Happy Christmouse Eve. Me and mum are up and just sort of lazing around. Mum still has her jammies on.

Sports Report  The Pack won on Monday night feetballs. It was significant in many ways. First the won the NFC North title, first time they won in the ViQueens stadium, and they kept the opposing QB's record at 0 for Monday Night feetsball. One more regular season game on Sunday at the Lions.

Mum dug out a special throw back for today. It features Derby and a song for him. Enjoy. 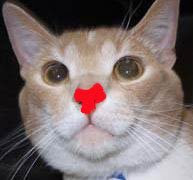 Derby, the red-nosed reincat
had a very shiny nose.
And if you ever saw him, you would even say it glows.

All of the other reincats used to laugh and call him names.
They never let poor Derby
join in any reincat games.

Then one foggy Christmas Eve
Santa came to say:
Derby with your nose so bright,
won't you guide my sleigh tonight?"

Then all the reincats loved him
as they shouted out with glee, Derby the red-nosed reincat,
you'll go down in history!
Mewsings by Just Ducky at 9:12 AM