I wish I could write as mysterious as a cat. - Edgar Allan Poe

Winter white stuff is back. It started late morning on Sunday, so no sun on Sunday. Mum had gone out and got the weekly foods before it started. 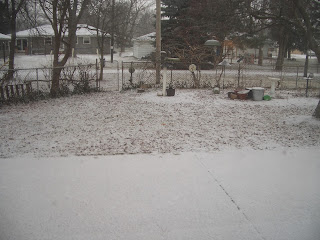 Just as it started to snow before lunch time and the Packer game started. 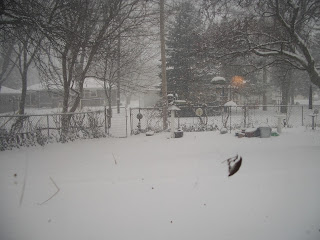 This was about 90 minutes later as mum was getting ready to go out and push the excess snow off the feeders so the fevvers can eat. 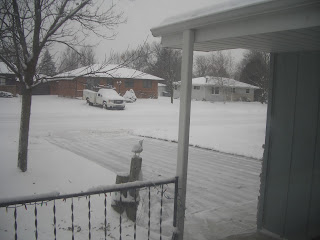 Mum went out after the feetsball game and cleared off the driveway. But it was still snowing so she will have to clear it again after the snow is done, sometime before she goes off to day hunt.

She hopes the driving conditions improve, lots of accy-dents with metal monsters spinning off the roads and crunching into each other. So bad they closed the roads in lots of places to clean up all of the crashed cars. Lots of peoples got hurt and a few even died, so we are sad for that. 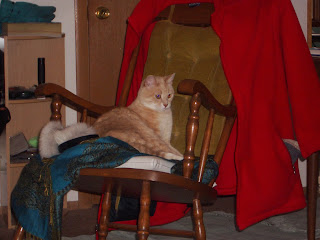 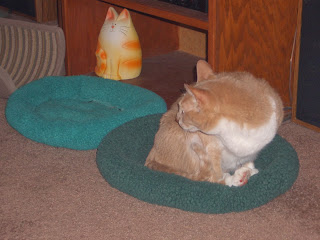 We will nap and stay warms. Glad that mum was home with us and safe too.

The Pack - the long nightmare is over, the won without ARodg! It wasn't pretty and it was only by one point, but it was a win. This is the first time since Oct 27 that they won a game. That is a long time with no wins for the team. Although mum says she amembers way back when they didn't win much like 30-40 years ago! But then she also amembers the glory days of the 1960's.

Grampa Brett - won a championship. Well not by playing but coaching a high school team is Miss-a-slippy. So good for him for keeping bizzy.

The Broncos - The won again with a big score. All the "experts" saying Mr Peyton can't play in the cold. He did pretty good today.
Mewsings by Just Ducky at 12:30 AM