The problem with cats is that they get they exact same look on their face whether they see a moth or an ax murderer. - Paula Poundstone

Yeah, probably what the beans would call poker faced. We cats don't betray anything, and we will never tell where you buried the body! 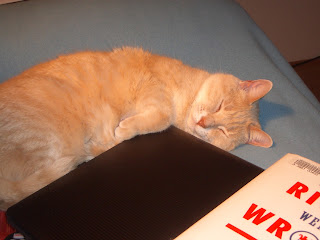 Me napping last night, partially trying to dream up this post! After the big cold box arrived, not much happened. Well at least for me. Mum did lots of cleaning, got the kitch-hen floor all spiffy and clean. Then the sucking monster was out doing lots of work. Mum had to move a few things so they could get things in the house. So while they were moved she cleaned some more.

Then stuff got put away for the season. All of her traveling cold boxes went down to the dungeon for storage as well. Plus she took down four big containers of litter. I think I am set for a while.

Me and mum both must have been tired from all of the cleaning. I had snuggled under the covers with her as she went to sleep. Eight hours later she woke up and I was still there! I usually wander off in the middle of the night. Not last night.

Some asked if they left me a big box to play in, no they didn't mum said they cut it up to get it out. They did manage to make a mess. They had one box for the plastic stuff used to protect things, they took it off the truck and the bottom came off. So the one guy had to pick up all of the stuff to clean up. 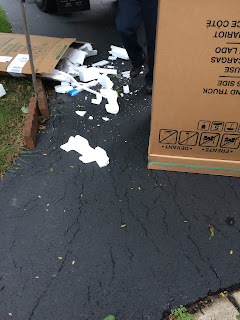 So the only box that was OK was the one that they started to use for all of their waste stuff. Mum did not want that hanging about. 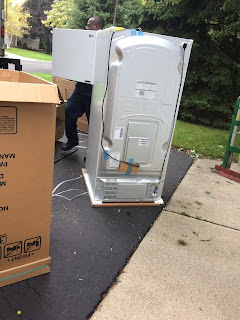 Otherwise we had a blah weekend, mostly rainy and clouds. We did get a little bit of sun yesterday, but it didn't last long.

The Pack - They were given the week off. A little early in the season, but that is how it is.

The Broncos - they won, the game was not on the moving picture box here. Mum didn't watch much feetsball at all this weekend.

Happy week everyone.
Mewsings by Just Ducky at 1:00 AM