HiYa, Ducky here. Happy Caturday and the Caturday before Christmouse. If your beans are not ready, they better get going. Still no snow on the ground here. The weather guesser said only a 10% chance of a white Christouse.

Miss Megan asked the other day about me having ornaments to whap to the floor. Well, what those were for Derby was some snow people. See, mum puts them out when we get snow on the ground that stays. We don't have that yet, so no snow people out for me to whap. Maybe some day, but not yet. 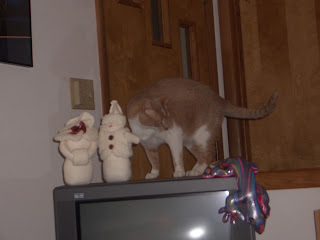 This is back from 2008, mum's old moving picture box which was big enough for Derby and the snow people to sit on it. He was probably getting ready to whap them down. 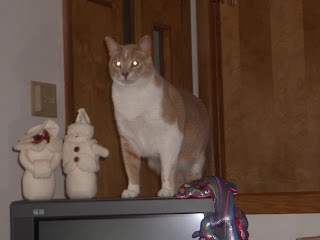 Me, I am not a big whapper anyway, so usually the snow people are safe with me.

Mum made her last trip to the food store afore Christmouse yesterday. Said there were way too many people in there, some just aimlessly walking around. She said they were husbands! Plus people trying to re-stock the shelves. Mum found her few things and got out quick! 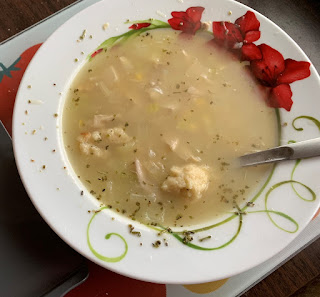 Mum tried out a new soup recipe yesterday, that is why she had to hit the store, she needed a few things, like an onjion. Said the soup is OK but would be better with some tweaking which she will do the next time she makes it.

Our nice stretch of sunny days has gone, so just clouds. While it was sunny the other day I invaded mum's lap and she got some close up pics of me. Nose and whisker humps. 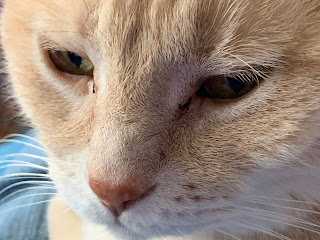 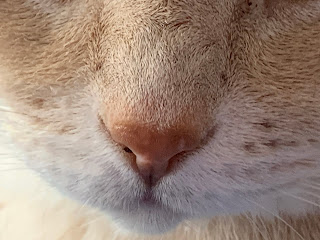 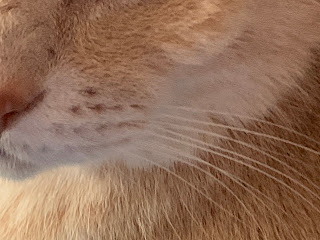 Have a good weekend everyone, be nice to people if you are out and about shopping, it's the most stressful time of year.
Mewsings by Just Ducky at 8:06 AM