Pretty quiet around here. The weather guessers were getting all acited, snow and ice on Tuesday night. What did we get? An hours worth of snow 9 to 10 AM, pretty much melted by 11 AM. Sheesh guys, really? Although mum was headed out for a lunch date with a furiend, when the furiend said they wanted to come shop at a store near us. So they had lunch close and mum didn't have to drive so far. 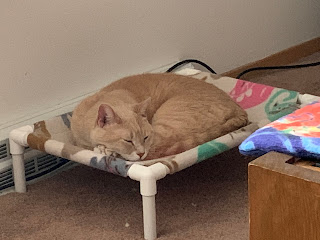 I just spend most of my time here soaking up the heat. Then I go sit on mum and soak up some of her heat. At night I crawl under the covers to soak up her heat. I stay there until I hear the heaty monster come on, then I am out and back on the ham-mick to stay warm.

Our Throw Back takes us back again to 2008 and Derby. Showing off his underside!

I got tagged for the picture meme by 4 Cats Ruffin It. I sent this picture in for the CB Calendar for 2008. It is on the December page, for "party time". 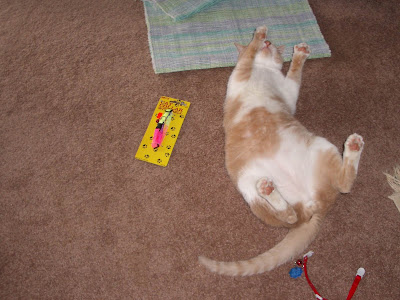 Mum had three folders of pictures for her then Catpics05, Catpics06, Catpics07. So this was from 2007. I was cellybrating getting my collar taken off, you can see it by my tail. I also think mum had brought home something that had nip on it, so I was being a bit nipped out!

I tag the rest of the cat blogosphere on this one, show us your pictures!
Mewsings by Just Ducky at 12:30 AM