The weather is back to where it should be. The sun is out, the weather is warmer and the windows are back open. Mum spent part of yesterday tuning up the grill, it needed a new gas thingy as the old one had rusted and had a big hole in it. So it was using way more gas and not cooking evenly. She also brought in the thing that the food sits on to clean it. I managed to get a bit too close and got some of the icky stuff on me! See that dark smudge on my nice white fur. 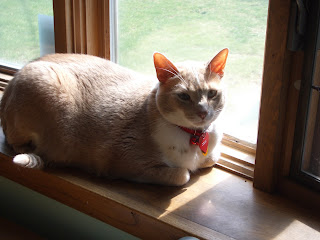 That meant a along and serious cleaning session with my tongue, but I think I got it all off now.

But mum decided the easiest way to get the grill grate clean was to put it inside the hot as hell box and turn on the cleaning cycle. So today she was taking everything out and wiping it out. I decided I had to snoopervise that she got everything wiped out properly. 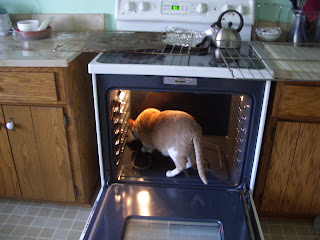 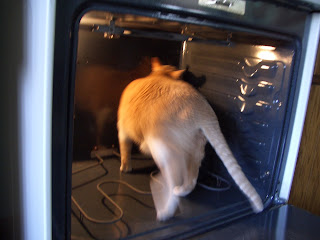 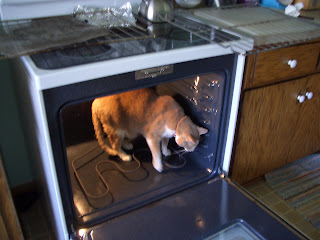 I approve, it is OK for you to use the hot as hell box again. P.S. Mum was not happy that I jumped in here and after the photo session, I was promptly picked up and dumped out!

While mum was working outside, she needed to sweep off the patio area. Get rid of some of the grill crud that she knocked off of the thing, plus some of the seeds and stuff falling off the trees and birdie feeders. But when she moved something to sweep she found a surprise! 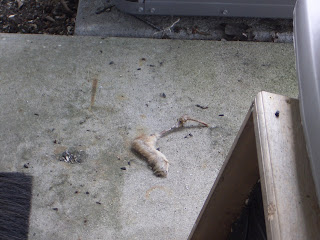 Mum thinks it is a leg from a bunny! Most likely that Mr Hawk was around and caught him. Then either the hawk or some other wild animal dragged the leg near the house. This is right by the big windows that go to the floor, but I don't remember seeing anything. So this must have happened while I napped. Mum didn't want to touch it, but also didn't want to have it sit up by the house. So she used one of her tools that she was using on the trill to pick it up and move it. 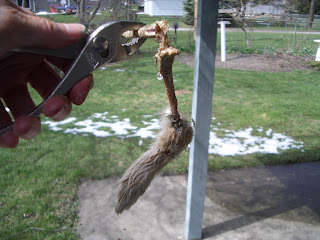 And lots of our flowers are coming back, even with the snow and cold weather. The poppies, daylillies, peonies and lots of other stuff are starting to peak through the ground and get green. Soon we will have lots of flowers. 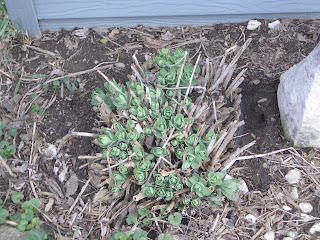 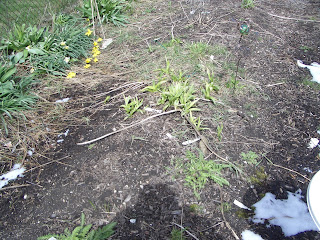 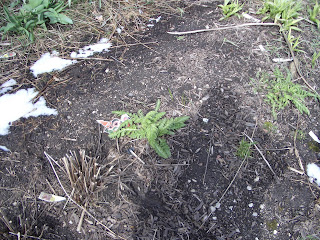 I know some of our blogging buddies are getting nasty weather, storms, rain and snow. Hope that you all are safe and dry.
Mewsings by Just Ducky at 12:20 PM