Sheesh, what is a kittie to do? Mum has hardly been around and when she is, she is not paying attention to me! Or letting me have time to visit all of my blogging furiends.

Friday, she went to work, then came home. But left again and didn't come come until many hours later! Plus she smelled of meat! It took that long to eat something? She did say she wished she could have been home earlier as it was a really long evening.

It was a night out for the holidays with her work people. Firsted, she went back in time (did she teleport?) to see dinosaurs! She says this show was good and recommends it if it comes into your town. It isn't just for people with little kids.

After the show, then they went to eat meat and lots of it. They went to a Brazilian place and they serve meat, meat and more meat. Mum says they keep bringing freshly prepared meats that you can get as much or as little as you want of all these different meats. Mum said the food tasted great, but it was so late to eat such a big meal. But she did save room for dessert, which was one of her favorites flan. Some people may know this as creme caramel.

Then today she has spent far too much time working with the sucking monster, writing things inside pretty cards, reading things that she has been pushing off. Plus stuff has been coming up from the dungeon that normally hides in boxes. The tree came up and the lights are on it. Plus a few snow people.

So I have been ignoring her! Two can play this game lady! So you can look at my backside. 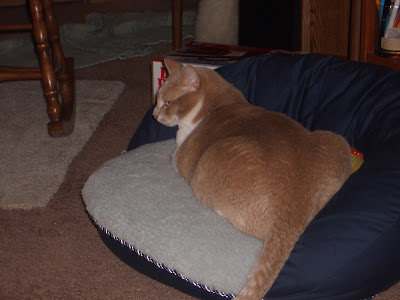