If stretching were wealth, the cat would be rich. - African Proverb

I wasn't doing much stretching at times this past weekend on Saturday. I spent extra time inside the PTU as mum decided had to just sit in the dungeon for a while. She had radios on that kept saying, 'take cover'. So we did. 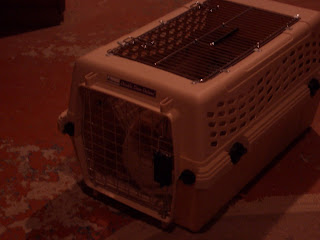 Here I am just sitting in the PTU watching mum sit on the steps to the dungeon. Just waiting for the time to go by until it was safe to go back upstairs. 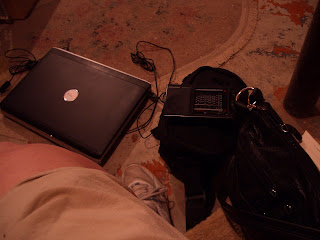 She brought a few things down with her that would be important besides me. Her 'puter, the money bag and her camera. She also had her emergency weather radio, a regular radio and a flash light. 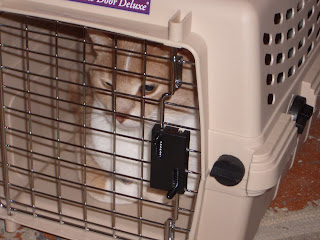 We spent about 45 minutes waiting and mum said I was a good kittie the whole time. I didn't get restless or talk very much. I guess I understood that we had to be down there to be safe. Plus with all of the bad weather we didn't get to see the horsie race live. That was about the time the weather beans were on the TV were talking, for a long time about the furry bad weather. 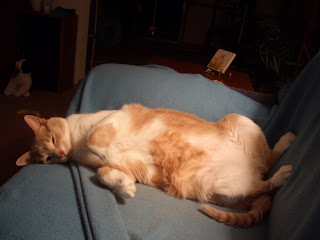 Finally we could go upstairs and I could get a chance to stretch some. That and listen to the rain and the boomers. I kept thinking of Bonnie and all the other kitties at The Bridge playing Thundering Herd of Elephants.

Mr Hendrix has some posts about being prepared for 'mergencies. Mum was prepared, she had the PTU handy and had me in it well before we had to go to the dungeon. Plus she knew exactly where the stuff she needed was with her radios and such. It is a little less scary if you are prepared

Hope every kittie if they had storms are OK. We are sort of soggy around here as you can see from the picture mum took of the water measuring thingy. Nearly 5 inches of rain between late Saturday afternoon and around 1 PM Sunday. When it rains this much in then the lakes across the trail show up. That actually might be fun for a little wafer to play in. Swing and splash around in the big puddle. 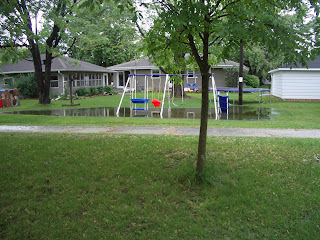 Mum says she is tired of the wet stuff. First a winter with so much snow, now a spring with lots of rain. Enough already!!!! Plus I can hear Bonnie and company doing THoE again!
Mewsings by Just Ducky at 8:48 PM