Well, I guess I have a whole bunch of cousins in Iowa. So there is the rundown on the gang. 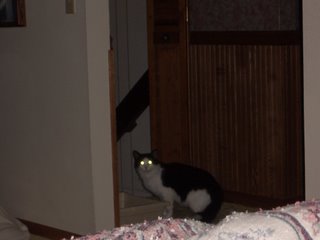 Starting with MommaKittie. MommaKittie is furry wild and this is the as close as mum could get to her. Sort of wild but does come in the house. But mum's aunt Mary hasn't been able to get her caught to take her in to be spayed. She had two litters this year. The kitties from the firsted litter were Sassy, Tigger and GG. They all have had their surgeries and mum's aunt wants to keep these guys. 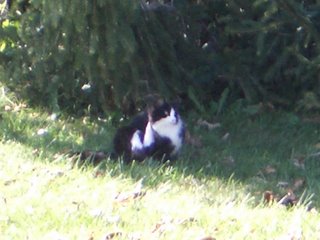 Sassy for now just stays outside. Mum did see her put one paw inside. Mary hopes that once the kittens are gone and it gets cold out she will come inside. Longhair tuxie. 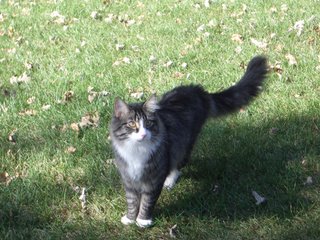 Tigger wasn't real friendly to strangers, so most of mum's pictures are from when he was roaming the back yard. Mum says he is furry handsone and has long hair too. 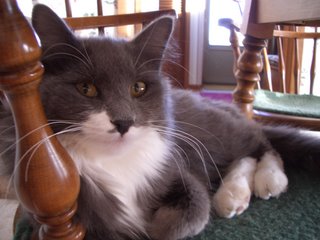 GG, short for Grey Girl, is the friendliest of the three older kitties and mum thinks she is the purrtiest of the bunch. Mum loves the black nose and she has furry long whiskers. She has a furry soft coat and purrty eyes. She would go outside lots but was inside lots too.

The MommaKittie then had another litter of 5 kitties who are now are nine weeks old. Mum gave them names and helped figure out if they were boys or girls. 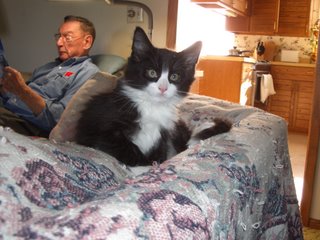 This kittie is Boots. She is a tuxie with longer fur, but not real long. Didn't come upstairs much so this is the bestest picture she has. She has four white feet, hence the 'boots'. You can see Grampie sitting behind Boots. 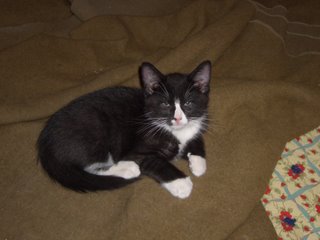 This is Tippi, named as such since the tip of her nose is white. Here she is 'alaxin on the bed in the dungeon. Other than to eat you didn't see her upstairs. She would hide in the dungeon with the MommaKittie. 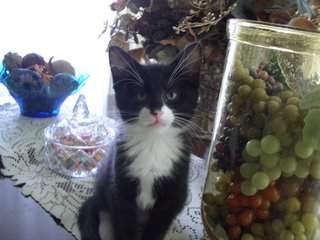 This is Smudge. He is another Tuxie, but short hair except right on his chest. Mum thought of Smudge since his nose is black. He came upstairs lots to play and he was an adventuresome kittie, trying to climb places. 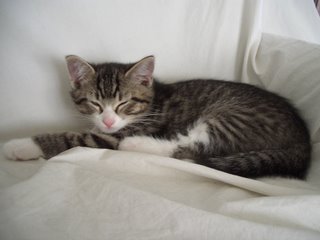 Then we have two tabbies, both boys. This is Rocky. Mum has the eyes and the tail reminded her a bit of a raccoon. Specially the tail. It has rings, then it long white strip, with the very end tip being black. You can't see the end of the tail on this picture. 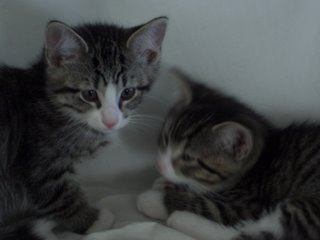 Then the lastest kittie is Stripe. Named as the white stripe down his nose is longer than Rocky's. And the end of the tail is just white. Otherwise these two look furry much alike. Stripe is on the left.

Now, mum says had I not been here she mighted have brought a kittie or two home. But since she wasn't and I wouldn't be prepared for new house mates, she didn't bring anyone home. Plus a 6 hour car ride probably wouldn't have been fun for the kitties. The kitties will be going to the shelter in the next few weeks. Mum and I hope that they find good homes. They seem a little scared of people, mum thinks that MommaKittie is scared of humans and so the kittens are a bit scared too. She tried to hold them and give them pets as she could. Mum said that her aunt should try to do that too to get them more used to humans.

Now which two would she have brought home? Smudge and Stripe. They were the most outgoing and upstair the most playing and interacting with the humans. She gotted a good picture of them together. 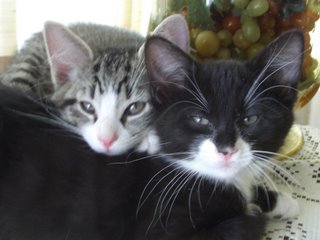 So greetings to my Iowa cousins. Purrs to all of you.
Mewsings by Just Ducky at 9:14 PM