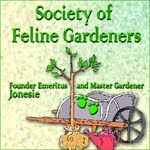 Hello and Welcome from Virginger to Garden Thursday.  Spring is coming slowly, but it is coming. How can we tell? Well we finally have our first flowers! 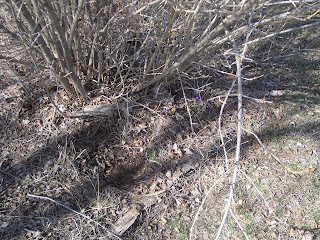 Out in the front by the four-sith-ia, something cleared out a spot to stay warm, maybe a bunneh. But just to the left of the spot is four little purple blooms. 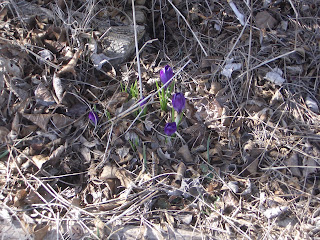 Our normal early flowers, the crocus. These are the only ones up and blooming, the white ones haven't shown up yet. 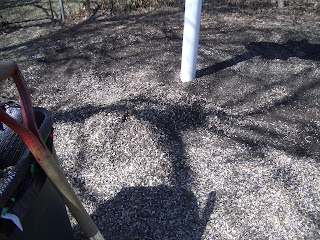 Mum got at some chores, she started scooping up the seed hulls from under the fevver feeders. Gosh they make such a mess and leave stuff. 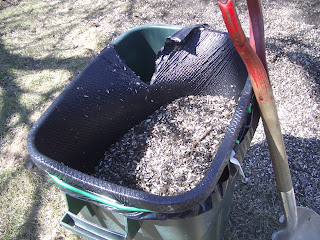 First bag full and starting to rip! Mum went and got a second bag, which also got filled up. 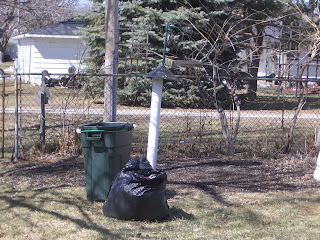 So the first bag and the second one in the garbage can. But it looks much neater and now the sqwerls won't have so much to paw through! 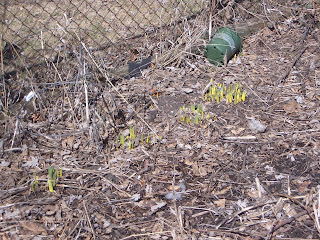 In the back by the fence, the daffy-dils are starting to poke up above the ground now too. 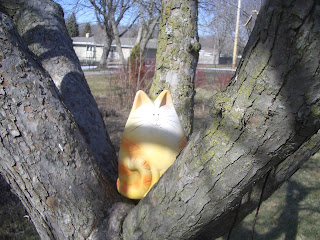 Me! Just hanging out in the crabby apple tree, snoopervising mum. She would work some, then sit down and rest. Well she did get done, so I could allow the rest periods. 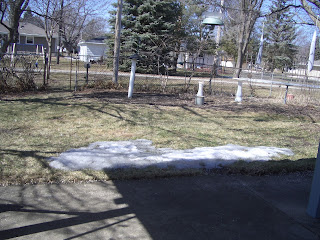 Snow report, yep, we still have it. This is from mum's resting spot, looking back towards the fence and the feeder. She also got the trumpet vine all trimmed off too. Branches picked up from the back yard. 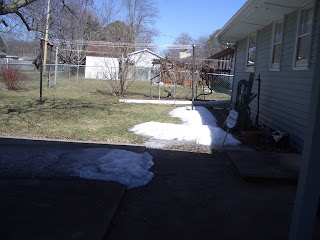 This is the snow behind the house, it doesn't get much direct sunlight, except late in the afternoon, so one of the last places to melt. 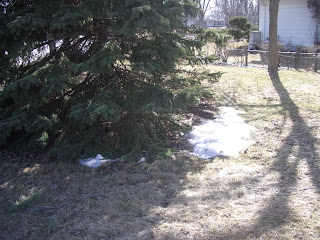 Behind one of the big spruce trees. Here too, just some late afternoon sun. 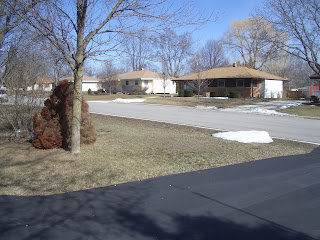 What is left on one side of the driveway and below the other side. Mum thinks by this time next week the snow will be gone. It is supposed to get nice and warms for a day or two. 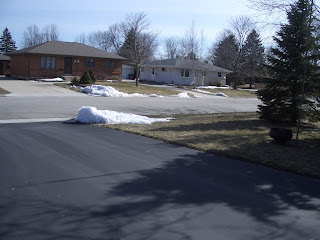 Last week we mentioned that we put out apples for the robins when there was still so much snow. Mum isn't sure if they would eat them, but robins don't eat seeds like most fevvers. They eat bugs, worms and such. But mum remembers from years ago, after a late spring snow storm that people put out raisins for the robins, so she didn't have raisins but gave the apples a try. They do eat the left over crabby apples off the tree, but we didn't have any crabby apples on the tree for them to eat.

Doesn't matter now, snow cover is gone, robins have access to the ground to find something to eat, bugs, worms, whatever.

Phew, lots going on this week. Busy! See you next week.

Love, Virginger
Mewsings by Just Ducky at 1:00 AM